Conversations with girls about thongs

If you can, please recollect some conversations you've had with girls (at any point in your life) in which they discussed their views on thongs or said anything. else thong related? I'll try to think up some of my own

NOT thong sightings, just quotes and paraphrases from real conversations
Also, a brief description of the girl would be great.

I'll bump this thread with my own text convo which I transcribed into a google doc, 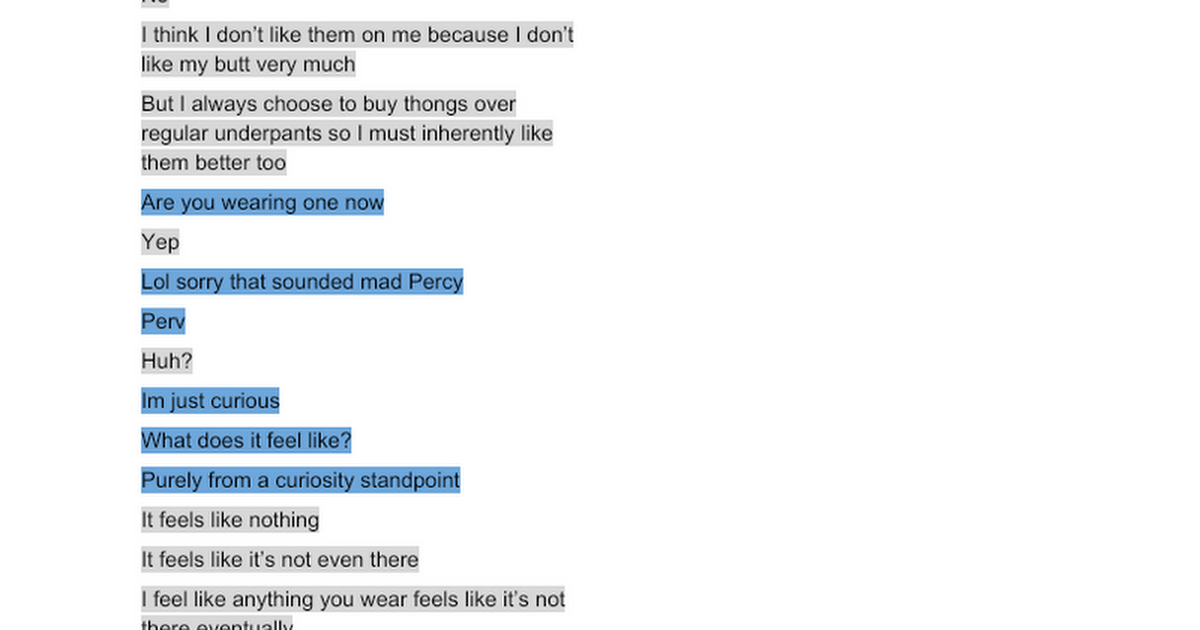 I have a thong fetish That’s not as uncommon Oh ****** liked that too Yea not weird But I like it to a weird extent Idk why It turns me on more than anything else on earth A thong? Idk why Is that weird No I think I don’t like them on me because I don’t like my butt very much But I always choose...

I quite often think about a conversation years back where a girl I went to school with (who was insanely cute) about how thongs "dont go UP your ass, they sit between your cheeks. My thong isnt in my asshole!"

Sniffer said:
I quite often think about a conversation years back where a girl I went to school with (who was insanely cute) about how thongs "dont go UP your ass, they sit between your cheeks. My thong isnt in my asshole!"

Lol I'm not into the fart stuff, but thanks for the first quote! It's pure gold
T

I was once talking with a female coworker (the topic of my recent post in the upskirts sub forum) and she said something like
“It took me ages to get around the shopping centre today, I was stuck in front of this woman in leggings and all I could see all the way up the escalator was her thong! I don’t want to see your thong thank you”
It was said in such a way that I think it showed her distaste for things generally. I saw panty lines from her often but never a VTL.

I was taking with two female coworkers where one was talking about how the others arse crack always showed when she bent over.
I don’t know exactly how it transpired but she was basically suggesting that she wear a thong (as if that’s any better) and as she was a slightly bigger girl she said ‘nobody wants to see my ass in a thong’ and the other girl said it always wear a thong’ and then asked me if my girlfriend did to which I agreed.
M

gregpatterson said:
If you can, please recollect some conversations you've had with girls (at any point in your life) in which they discussed their views on thongs or said anything. else thong related? I'll try to think up some of my own

NOT thong sightings, just quotes and paraphrases from real conversations
Also, a brief description of the girl would be great.

Thanks everyone, keep posting great stuff
Click to expand...

My 1st wife said to me and I’ll try to remember her exact words: “I have to stop wearing thongs because they tend to feel I am being sawed in half”. I can’t forget that and keep picturing her thong in her privates

This stripper once told me that she wore thongs for work only and she couldn't understand why I was so obsessed with them. I gave her a glimpse of the thong I was wearing and she told me my thong was cuter than her ordinary underwear.
N

A colleague of mine (office job) confided in me that while working overtime on a clusterf*** sort of a day, her thong was giving her the most grief. She was stuck in briefings when she wasn't speed-walking between departments in her pants suit, and moments to adjust her underwear were few and far between. She tried adjusting throughout the day, but the thong was simply too small or the wrong fit, so she got proper sore back there. I know she still wears them from time to time, though.

Side-note; I was surprised that she'd share something like that, considering we're colleagues and friends by proxy only. I don't remember why thongs came up, but I think the fact that I appeared neutral to the topic and asked questions from a place of concern and very mild curiosity, rather than being openly interested, made it seem like work-appropriate talk.

And a final tangent! I've noticed something through conversation with girlfriends/flings, and a random google search will also back this up. A lot people don't seem to know that thongs need to be the right fit, and simply give up once they try a few that give them the permanent wedgie feeling. Thongs are something you have to know how to wear, strange as it sounds.
P

Did she ever mention thongs again Northern Lynx? How old is she.
N

We mostly talk work, and since then she got engaged to a mutual acquaintance, so I don't expect she'll bring it up any time soon.

She's in her mid-thirties. Maybe 32 at the time of the story.
P

My wife's cousin only wears thongs. We were on a family vacation and I knew that there would be a few times when I could smell hers, but I could never find any worn thongs. She was either in a bikini or leggings the whole time. Later on, she was talking to her sister about leggings and that she never wears panties under leggings. I was pissed at myself for not spending more time checking out her leggings...
A

I remember this conversation with two female cousins. They were talking about ads for feminine lingerie we can see on the streets and they told it could be fun to see ads with men in lingerie. They didn't know I was wearing a thong at this time. I didn't say anything because there was too much people around but I'd like to let them know what I wear under my male clothes...

Here is a conversation I would like to start with a girl I know from church.

I’ve seen photos of this girl in a bikini before, and I wonder if she’d be down to wear a thong bikini in public. From what I know, she likes going to the beach and she works out to stay in shape. She’s pretty chill, but I just don’t know how she feels about thongs in general or how she feels about showing her asscheeks in public. I think I could plan a beach outing with her, but I don’t know if I can convince her to wear a thong bikini in public. How should I start the conversation? Bear in mind that this is someone I know from church and I don’t want to sound like a pervert. I am actually trying to find someone who can thong with me on the beach. (I am a guy who wears thongs on the beach)
D

My female office co-worker and I have had a couple conversations about thongs over the years. I have joked about wearing one and needing to get a new one. I've also joked with her that I wear them in my backyard to sunbathe in and I think she suspects that I do wear them. To that she remarked that thongs aren't a good look for a guy. I asked her why but she never really gave me an answer. She mentions the movie Magic Mike a lot which has guys in thongs in it so I think she does like it but won't admit it. We've looked at photos of guys in thongs too. I've never seen any evidence that she wears them which is too bad because she would look great in them.
You must log in or register to reply here.
Share:
Facebook Twitter Reddit Pinterest Tumblr WhatsApp Email Share Link
Top