This happened more than two weeks ago and I’m still in shock.

I was home for the holidays and nothing was out of the ordinary. My parents who are both in their 50s live out in the middle of nowhere so me and my two 30ish year old brothers and my younger sister had nothing to do other than just hang around the house and watch tv and stuff. I’m obsessed with thongs, but I basically forget about them when I’m home because my sister is heavier and not a thong wearer and my mother has dressed extremely conservative for my entire life (long dresses and full coverage sweaters) even though she is pretty fit for someone her age.

That’s why I was so surprised when out of the corner of my eye I thought I saw a bright orangy-pink strap like one that would be on a thong pop out from above her fairly high waisted jeans when she was making dinner one night. I immediately stopped what I was doing and I repositioned myself so that I would be able to see if my first instinct was correct. But once I moved she only bent down like 2 or 3 more times and I never got another peak. As we ate dinner, I couldn’t stop thinking about it. I’m not sure why but it just seemed so crazy to me that my 50+ year old mother would wear a strappy thong or really any thong at all. By the end of the dinner I had basically convinced myself that I was wrong and had mistaken a belt or the top of some ripped granny panties for a thong. I mean she was wearing high waisted jeans so the thong would have to have been so far up her ass to stick out.

I kind of forgot about it at that point until the next morning when i was looking for more shampoo for their guest shower and my mom told me to check in their bathroom closet. Inside the closet is also apparently where my parents put their laundry and even though I wasn’t looking for it at all as I looked for shampoo it was impossible to miss a bring neon double strapped Victoria‘s secret thong sitting on top impossible to miss. (Picture of it attached.) I didn’t know what to think or do so I grabbed it along with the shampoo and went to take a shower. But after taking a picture and being unsure of whether to be turned on or weirded out I realized that my mother might notice that her thong was missing and realize it was me who took it. So I ran back to their closet and put it exactly where I found it. After the shower however probably 20 minutes total time I brought the shampoo back to their closet as an excuse to get one more look. It was still so crazy to me that my mom would wear something like that under her super conservative clothing. But when I opened the door the thong was no longer where i put it but instead i figured out after a few seconds of searching it had been placed under the shirt she wore the previous day i guess as a way to hide it.

Needless to say I have so many questions. How long has my mom worn thongs like this? Is she having an affair or something that would spark the new underwear? Does she know that I saw the thong and that’s why she hid it? And also is it weird if I’m a little turned on by it?

There is one just as crazy follow up story from the past week but I haven’t decided whether I should tell it or not.
https://flic.kr/p/2kqo4zt
B

The link is bad plz reupload the picture

Love that story nearly came reading it. I have to see that picture
U

Sorry here is a link that should work

Those are some sexy panties she has. Your cock looks amazing
G

can u get some of her panty drawer
M

Wow..post some more pics of her bra panties thongs

get more and lets see the gusset
T

I totally get this. I’ve been dating a lot of 50+ women over the past 4.5 years some married most divorced. At first you see the plain cotton briefs or the occasional cotton boy short. But once we start hooking up and they see my jocks and thongs and bedroom behavior they become revitalized. They revamp their wardrobe and it usually starts in the panty drawer. Your mother could be having an affair or maybe they’ve reignited their sex life. I hope it all works out!
M

Too bad you couldnt get a picture of her in the thong. Love to see older ladies wearing thongs(and revealing bathing suits, short shorts,and spandex).
B

I loved reading this, wow... Please tell the follow up story.

I am 55 and my wife is 54. I have worn thongs for 25+ years. I originally wore them to stimulate our sex life but it didn't work.....in the beginning. The past couple of years, she has been exercising and wearing tights and our daughter suggested that she wear thongs or gstrings under them to avoid panty lines. So she began wearing them but only under her workout clothes. Every chance I got to see her sexy ass in a thong I made sure I complimented her on it. Now she wears thongs daily as her underwear of choice. While she doesn't wear her thong or gstring around the house or while she is getting ready for work in the morning. I always get my thong on as soon as I get dried off from the shower. I love looking at my ass in thongs and hope she does as well. Based on how things have improved in bed the last 12 months, I believe she does like my ass in thongs!
U

Can you re-upload the photo? Both links appear to be broken
G

. Almost sounds to good to be true! Sexy and modest milfs with sexy panties are one of life’s best gifts. Please be true, and share more if you can!
S

Ok I have a small update.

I have been sitting and standing behind my mother as much as possible over the past few weeks ready to catch any time she bends down and a thong slips out. But so far I haven’t seen anything since the first time I described before. I do feel a little bad about looking at her ass all the time, but I am just interested to see just how often she actually wears thongs and if they are all as “young and sexy” as the first one.

The other day I did learn that she wears at least one other strappy Victoria’s Secret thong. When my mom did her laundry I waited until the machine finished and ran over to check out if I could find anything interesting. Sure enough on the very top was a bright red g string that almost looked like she wore it during christmas time. Even after seeing the first one I couldn’t believe it. Does she really wear these things? Needless to say I ran to the same bathroom as before and took a quick picture before putting the thong back so that she didn’t notice. I’m pretty sure that she didn’t catch me this time, but now I am just even more interested to catch her bending down some time. Below is the picture I took. I’ll let you guys know if I see more. 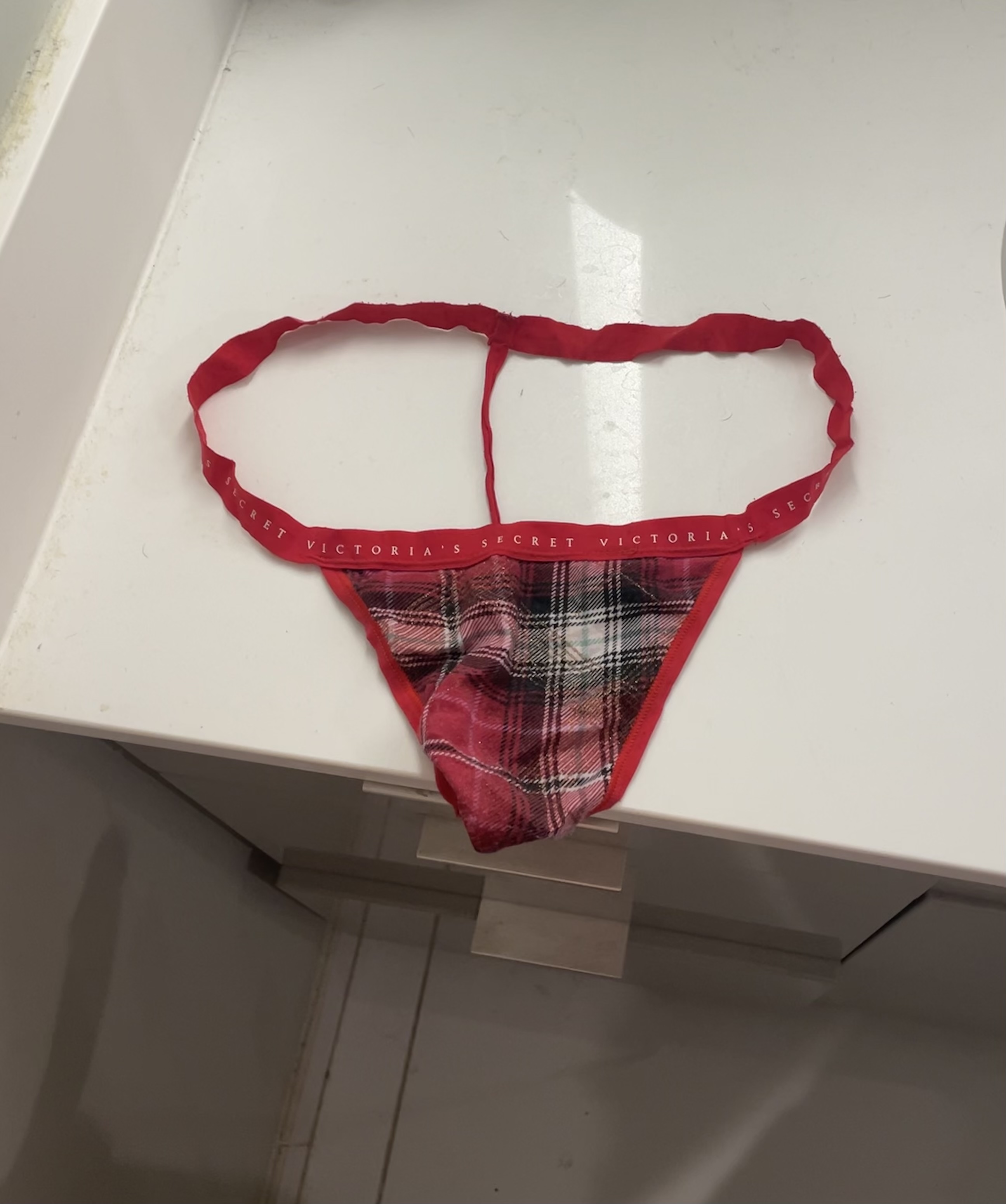 nice thong!!
show the first thong you see of her!
M